You are a newly-certified Devil Breeder (congrats on passing the exam), and the time has come to hatch your Devil Egg and raise the Larval Devil inside into a champion!

In this solo TTRPG based on Monster Rancher, you'll help your Devil grow from a baby into an adult, training it all the while so it can be a proper Devil and win one of the numerous Tournaments available in the underworld!

- A deck of standard playing cards

- A journal or sheet of paper

- A pen or pencil

- The spirit of Satanic Gentleness!

In order to download this game you must purchase it at or above the minimum price of $12 USD. You will get access to the following files:

To add on to what Koleos said, Affection is generally infinitely better than increasing a stat as long as they have some moves. I got an ace of hearts, but already got Light of Chaos, why would I boost their lust by 1 if getting another affection would allow me to add 1 to 6 lust every tournament. Even besides that, Covet alone is better than a flat +1 increase in one stat, because you get to choose where it goes.

You could make Affection less powerful by making it so they can only do a move once per tournament unless you learn a move multiple times, but that would make all the tournaments a lot harder as you just don't have enough ways to learn moves.

Another solution would be to make it so you can't just decide to get affection after not getting a face card, maybe you have to decide not to draw a card to gain affection. I think that is the best option, makes you want to draw for face cards but even if you don't it's possible to get a stat increase. It also fits the idea that you choose to rest instead of even bothering to try to train.

If you don't like that, you could instead roll to get a stat if it's a 6 or below, and if it's 7 or above, you can roll or get affection. Lastly, if you wanted to make it so you aren't likely to get much affection at all, you could have it so you can only get them with face cards, choosing to get affection instead of a move.

Just played for the first time, had a lot of fun. I did notice, though, that it seems like if you get lucky enough to get two moves in the same stat (any stat), it's very difficult to lose - use your +3 move as many times as you can afford, use your last move to swap that stat with the tournament stat, win. It's a cute little solo RPG that I had a lot of fun with, so maybe it's okay that with a little luck, it's relatively easy to win - but it is something that stood out to me.

(Heck, even with 2 moves in different stats and enough affection, I think you could basically guarantee victory - say, raise Wrath by +3 multiple times, switch Wrath to Gluttony, then switch Gluttony to whichever stat you actually need. As far as I can tell, the above would work, although it would cost 2 Affection to swap the stat twice.)

Had fun, do recommend, wanted to mention the above in case it's unintended! The art's great and I look forward to seeing the ranch and devil sheets! 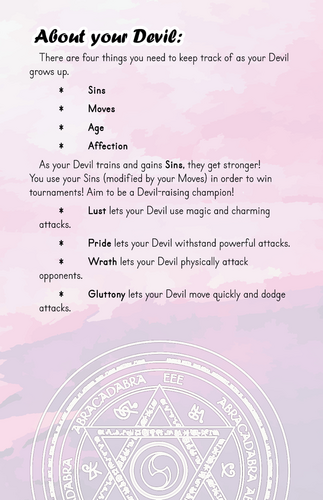 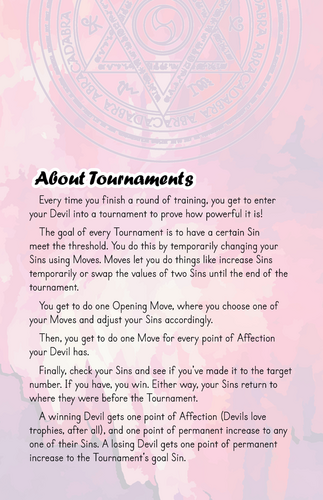 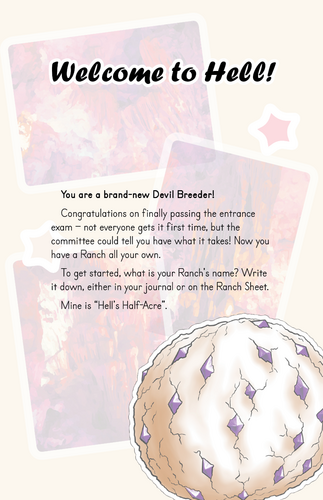 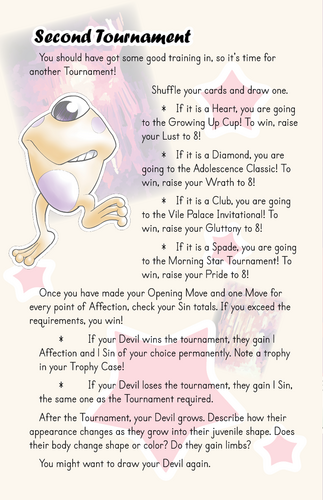 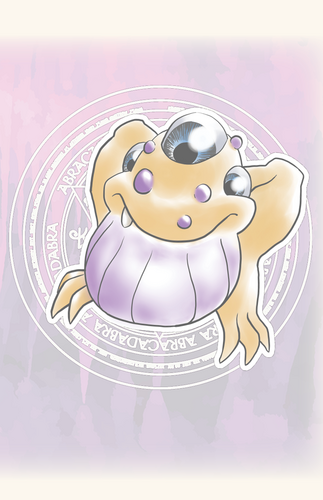 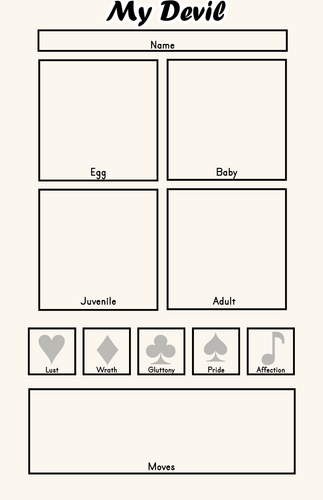