We’re looking for playtesters to help us get our game Heroic Chord ready for launch! Join us in the pastoral post-apocalyptic world of Amylte, where the memories of war are still menacing people as they try to decide what kind of new world they want to build. Play as a Ranger, one of the chosen ones of the divine monuments, and use your magic and your skills to protect people.

For more from Heroic Chord, check us out on twitter! You can also come talk to us on our Discord!

Heroic Chord is a heroic fantasy rpg in the style of Xenoblade, Rayearth, and Final Fantasy X. It has a pastoral aesthetic (think Ryuutama or Blue Rose,) and it's primarily about helping people and repelling monsters while picking up after an apocalypse.

The game is currently a 93 page rtf document, but since it's still in playtesting, that will change.

PCs in Heroic Chord take on the roles of Rangers, wandering pilgrims who have bound themselves to one of seven godlike creatures. All rangers have access to magic, but using that magic causes them to Scatter, or disassociate. Mental illness is a topic that Heroic Chord covers in a number of different ways, but it's positioned as normal. Neither the text nor the mechanics construct it as a Flaw, just a normal feature of reality.

Mechanics-wise, Heroic Chord is a medium crunch game. It uses a d6 pool where you succeed on 5s and 6s, and where you can accept complications to take 1s as successes too. If you can learn D&D, you can definitely learn this. And if you like the wealth of character build options in D&D, you'll like HC's offerings too.

Every character has a class, five stats, spells, skills, an ability, a combat specialty, and a bunch of other neat flourishes. Those flourishes are sometimes just roleplaying color, but also there's stuff like Lessons. Lessons are ways characters want to grow. Each campaign, every PC gets a character arc dedicated to their Lesson. When a character clears their arc, the whole party gets new skills.

Character growth is frequent, but it isn't EXP-based. Instead, it tends to happen around character development and the ends of sessions. This promotes a more organic feeling to the game, at the cost of a little bit of crunch.

Character gear is likewise simplified, in that the game doesn't really track it. You have whatever it's appropriate for you to have, and Heroic Chord doesn't want to dwell on the minutiae any further than that.

However, when Heroic Chord hand-waves these things, it's in order to focus deeper on the game elements it cares about. Character creation is full of choices, both stylistic and mechanical, and the kit for each Class feels diverse and inviting. Will you be a lancer atop a cloud elk, galloping through the sky, or a full-plate crusader conjuring specters and letting dead warriors guide your hand?

Magic in Heroic Chord is sort of an edge case on the complexity spectrum, because it's not tied down by any particular spell list or component system, but it does have some very nice gameable crunch to it. The basics of magic are, you create spells from keywords tied to your character and your environment, and then you work out with your GM what your spell does. You pay a cost in Scatter for the spell, and your teammates can join in by shouldering some of that cost, or you can draw on the Scatter reserve in your Class' kit for a consequence.

Choice, consequence, and cooperation are all center-stage in the spell system, and it feels fair to say they're center stage in Heroic Chord itself. This is definitely a game where the GM isn't out to protect or kill the PCs, but to play the middle ground and push them towards excelling.

Combat has a similar feeling, and has the PCs making progress towards different kinds of Goals, any of which can be used to resolve the situation. Different Goals require different dice and benefit from different abilities, so individual character builds can still shine, but combat is flexible enough to be used for social situations or enduring harsh weather just as easily as it is for swords out fighting.

Lore-wise, there's a *lot* going on in Heroic Chord, so I don't have time to cover it all, but this is a very setting-focused system. If you like high fantasy stories about maintaining a kingdom rather than building or destroying one, you'll like this.

Overall, this is a big, hefty system with a lot of stellar design decisions and opportunities to build a ton of cool stories on its foundation. If you like high fantasy, if you like teamwork, if you like pastoral aesthetics or Mercedes Lackey or Princess Mononoke, definitely give this a shot.

Heroic Chord is a wonderful game with a fresh new take on Magic. I love that magic always uses two elements - one chosen by the player and one presented by the GM.

Playtested it a month ago and it feel so well polished that I can't believe that this was 'just' a playtest. 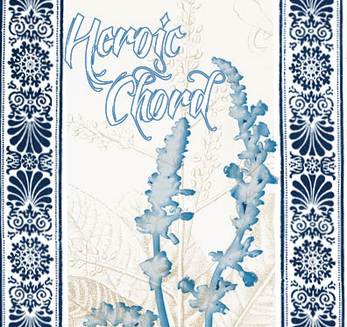